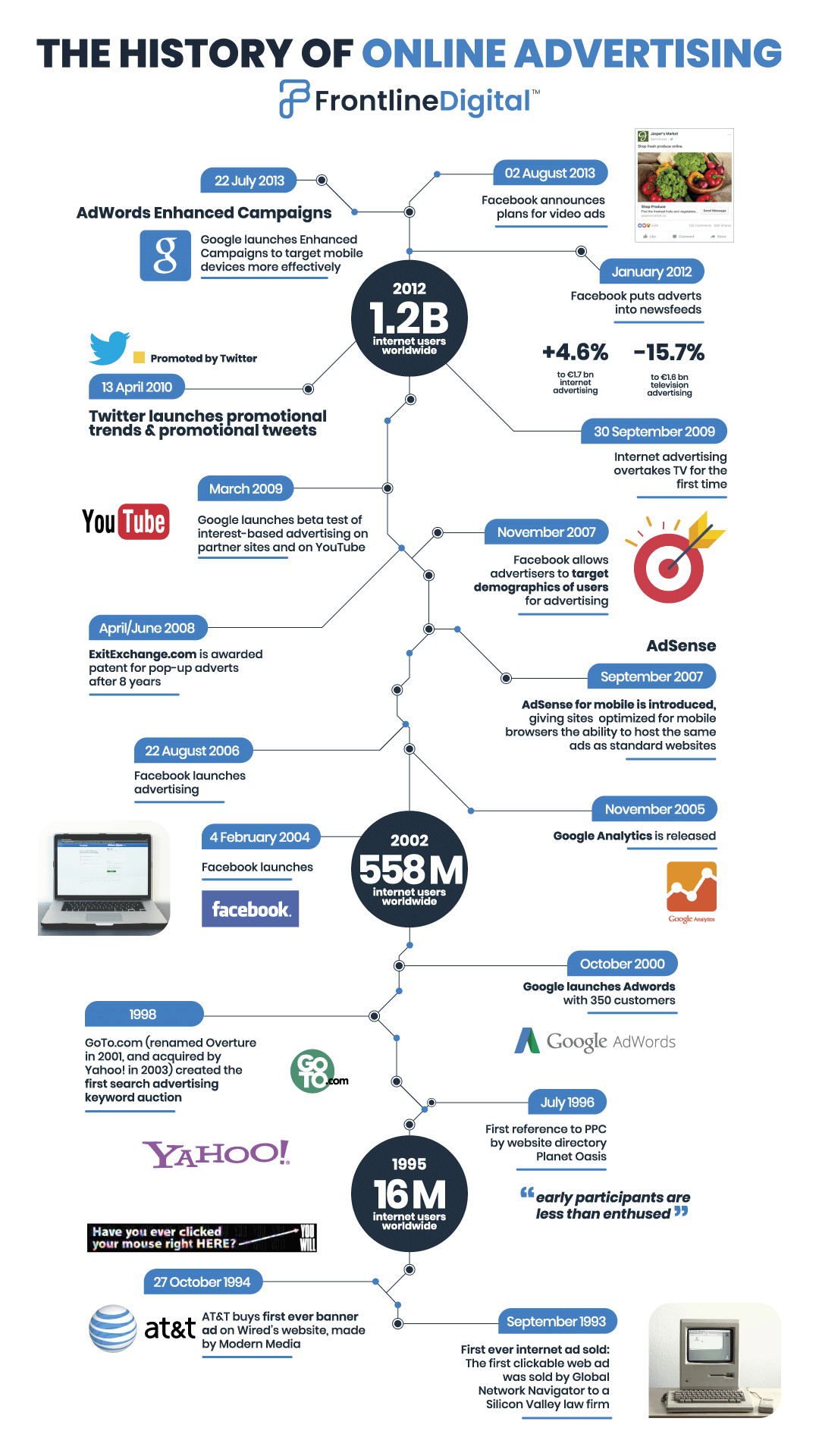 The History of Online Advertising

Because most individuals are so accustomed to having an endless amount of information available at their fingertips, remembering a time when that wasn’t the case can be a difficult feat. In only a little over 30 years, the internet has gone through such a significant transformation. Since the internet is the center of many aspects of daily modern life, it is one place where we engage with advertisements the most. In the year 2020, it is expected that the average business will use 45% of its marketing budget on digital copy. This is why a digital marketing business must understand how to utilize advertisements as a way to reach their target audience. To understand this further, it is important to look at the history of online advertising and its transformation over time.

In the year 1994, the first-ever banner ad was purchased on HotWired.com by AT&T for a price of $30,000. Out of the many people that viewed this ad, 44% clicked on it. To put that into perspective, the average click-through rate of a display ad just last year was 0.35%. As a result of this breakthrough concept, the term “Banner Advertising” was coined. The banner ad concept soon became more popular as it was a way for websites to keep their content free for all users. This small rectangle truly is what changed the course of the online advertising industry forever.

As the popularity of banner ads continued to grow, advertisers became more interested in finding a method to target a specific consumer rather than hoping their banner ad would be seen by their intended target audience. Targeted ad placement soon became a concept utilized as a way to target consumer demographics. WebConnect became the first ad network that specialized in efficient ad placement. This agency worked to identify websites their clients’ target audience would visit to help their clients be more strategic when placing ads. As a result of this, many businesses were able to reach their ideal consumers and produce ads that were more applicable to their consumers. WebConnect was also the creator of the CustomView tool which was used to prevent “ad fatigue,” which occurs when users are repeatedly shown an ad.

As the use of banner ads was still high in popularity in the year 1996, advertisers sought ways to determine whether or not all of their advertising efforts were made in vain. Advertisers wanted to find a way to view the success of their ad placement and better pinpoint their target audience. As the need for a solution grew, DoubleClick was introduced as the first Application Service Provider (ASP) or internet ad server used for banner ad campaigns. DoubleClick offered a service that gave businesses the ability to track how many times their ad was viewed or clicked. This service, D.A.R.T. (Dynamic Advertising Reporting & Targeting), also allowed businesses to track their ad performance in real-time and use this data to revise an ongoing campaign.

A then developer for Tripod.com, Ethan Zuckerman, has been credited for the creation of the code responsible for enabling pop-up ads in the late 90s. Zuckerman expressed his intentions for this by explaining that pop-up ads were a way to keep an ad off of a webpage while also allowing visitors to see it. Although visitors were viewing each pop-up ad, this method of advertising turned out to be unsuccessful as it soon became the standard for web browsers to come equipped with a pop-up blocking feature.

By 1998, ads were still frequently used however, their click-through rates had begun to decline. A search engine company soon emerged as a way for advertisers to pay for ad placement, which then evolved into pay-per-click. The website, GoTo.com, would allow advertisers to bid on who would appear at the top of the search engine results for specific keyword searches. As this concept gained traction, search engine results were being determined by the amount of money a business is paying to be seen by the public. Online users were not a big fan of their search engine experience once this method began to compromise every search result. To combat this issue, Google created a program called AdWords that would allow for businesses to make a return on investment on their ad placement without sacrificing the search result’s relevancy.

With the popularity of social media growing rapidly in the mid-2000s, advertisers sought out a way to place their ads onto these sites. In 2006, Facebook began to display ads to increase their profitability. When Facebook started working alongside advertisers, they began to display small ads and sponsored links, which then led to ads that were targeted to a user’s interests. Having ads displayed on Facebook was an attempt to provide the online user with content that captures their attention as opposed to providing them with ads that show no relevance to their interests. Since then, many well-known social networking platforms have made it a standard to provide their users with an advertising experience that is personal to them.

The Future of Digital Advertising

As the history of advertising has shown, as technology advances and improves, methods of advertising will transform along with it. We have seen that as time progresses, more efficient ways of advertising will emerge to replace older techniques. As of recently, digital advertisement has consisted of a user experience that feels more personal without feeling invasive. Providing online users with content that is more targeted and personalized allows for a higher engagement rate; beneficial for both advertisers and consumers.